Listing of interesting places to the family.

Hoelscher Haus  – located in La Grange, TX  on the grounds of the Texas Czech Heritage and Cultural Center, Inc.   It houses the Polka Lovers Club of Texas Museum.  In 2005 Esther and Henry Hoelscher donated the home to the museum.  The home was built by Anton Hoelscher Jr.

GRAVE SITE OF ANTON HOELSCHER, SR.    ANTON HOELSCHER SR. AND WIFE, KATARINA, ACCOMPANIED BY SONS, ANTON, JR., JOSEPH, WILHELM, BERNHARD, ET AL, IMMIGRATED TO TEXAS FROM OLFEN, GERMANY, IN 1846. UNABLE TO REACH THEIR LAND GRANT IN MCCOLLOUGH, COUNTY BECAUSE OF ITS OCCUPANCY BY THE FIERCE COMMANCHE INDIANS, THEY LANDED HERE IN EHLINGER. 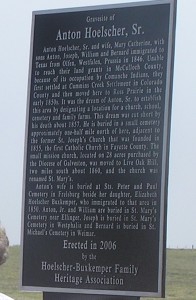 THE DREAM OF ANTON SR. TO ESTABLISH THIS AREA DESIGNATING A LOCATION FOR A CHURCH, SCHOOL, CEMETARY AND FAMILY PLOTS WAS CUT SHORT BY HIS DEATH IN THE 1850’S. HE IS BURIED IN THE DESIGNATED CEMETERY PLOT ABOUT ONE-HALF MILE FROM HERE. HIS WIFE, KATARINA IS BURIED AT STS. PETER & PAUL CEMETERY IN FRELSBURG BESIDE HER DAUGHTER, ELIZABETH.
ANTON, JR., AND WILHELM ARE BURIED AT HOSTYN HILL IN ST. MARY’S CEMETERY NEAR EHLINGER.
JOSEPH IS BURIED IN WESTPHALIA, FALLS COUNTY.
BERNHARD IS BURIED IN WEIMAR, COLORADO COUNTY IN ST. MICHAEL’S CEMETERY.
ERECTED IN 2006 BY THE HOELSCHER-BUXKEMPER REUNION COMMITTEE

Elizabeth & Theodore Buxkemper Historical Marker   – located at their homestead. The homestead is owned outside of the family. 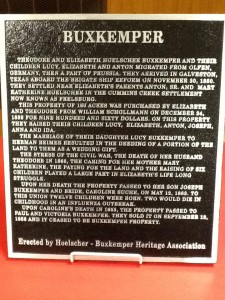 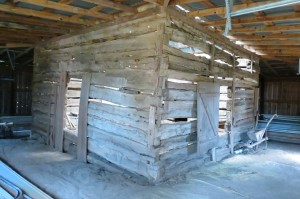